“Century Ride for the Ocean” & Party at the Point!

On August 24th, for the last leg of the Tour for the Shore 2012, Sean Dixon was joined by dedicated ocean advocates for a 105-mile Century Ride for the Ocean!

At Sea, Margo was joined for her last leg of the Tour (canoeing around Montauk Point) by a host of Surfrider ocean advocates!

Special thanks to Andy Sabin, Nancy Wendell and the Sabin Family Foundation, April Gornik and the Peconic Baykeeper, Kevin McAllister, and Jay Levine and Surfrider Eastern Long Island Chapter for your support!

A very warm and special thanks to Rav Freidel of Concerned Citizens of Montauk for his efforts from start to finish for the Tour for the Shore. Organizing, networking, and putting up signs don’t even come close to describing all that you have done! Thanks Rav!!

Here’s a map of the road route the cyclists took: 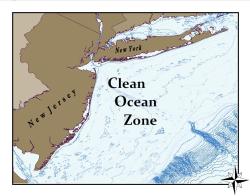 What is the COZ?

The Clean Ocean Zone is an initiative coordinated by Clean Ocean Action but written, supported, and promoted by all of the citizens with an interest in a clean, healthy, New York/New Jersey Bight.

If we succeed in achieving federal protection for the NY/NJ Bight, we would be creating the nation's first "Clean Ocean Zone" - where pollution is locked out and clean ocean uses such as fishing, surfing, boating, and swimming are protected and promoted.

Explore our site for more information on how to support the "COZ" and how you can support our clean ocean economy!

Thanks for your support in helping us keep the NY/NJ ocean clean!